Android allows a lot in terms of customization, so may as well make the most of it. This post is all about Nova Launcher - one of android's most popular launchers, and how you can set it up to both make your home screens look amazing, and still be fully functional.

What is a launcher?

A launcher is basically a home screen replacement in the form of an app - you download a launcher from the Play Store and then set it as the default action when the home button is pressed. Once you've started using a launcher, you can go into multitasking and kill the default launcher on your phone. The main reason to install a launcher is that you a) want added functionality, b) want more customization options, or c) would rather anything than the manufacturer's UI. 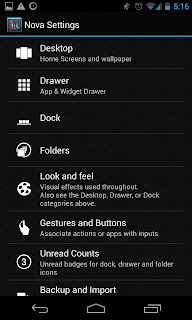 Nova Launcher allows you to set the number of home screens, the animation shown when you scroll through them, change the grid of icons, allow you to change the size of ALL widgets, let the dock scroll, add gestures, and a ton more.

As far as gestures on the home screens go, you can set a swipe down to pull down the notifications (no more reaching up to the very top), a swipe up to open the app drawer, double tap to quick launch an app...in all there are 9 gestures which can each be set to perform an operation.

Under "Look and Feel" you can change the icon theme, color theme, and different animation speeds. 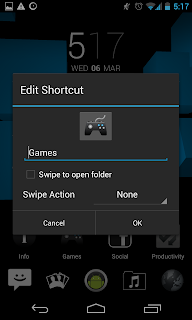 With Nova Launcher you get the option to make more of your home screens. When you touch and hold on an app icon on the home screen you will get 4 options: Edit, Remove, App info, and Uninstall. When you touch and hold on a folder, you get the options to Edit, or Remove. What does "edit" let you do? In the second image on the left is a screenshot of the edit shortcut screen for a folder (same as an app except with the toggle box to open folder via swipe). Tap on the icon to change it (I've already set my games folder icon to a single image - the game controller - instead of the stock "fan" of apps). Every icon can also have an added "Swipe Action". If you set a swipe action, when you swipe up on an icon it can perform a different action. For example, touch on the Games folder icon to see the folder, but swipe up on it to immediately launch Angry Birds. That's pretty useful. 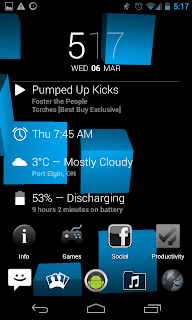 The third image on the left is my single home screen. The widget is Daskclock (which I recommend looking into), and the background is Exodus for those of you who are wondering. "Info", "games", "social", and "Productivity" are all folders with icons I have switched, and on the dock is SMS, the gallery, music and the internet. In the middle of the dock is a circle with an android in the middle which I use as my app drawer icon.

I've played around with many launchers, but Nova Launcher is the one I consistently come back to. I find it gives me all the options I need without any overkill. There is also a paid version ($4) which I'd suggest thinking about getting if you like Nova Launcher. You can find the paid version here.