Color Oil is a logic game with a unique idea, and chill music. It's easy enough to get through the levels, but difficult to get 3 stars on each. It's a fun, yet challenging game.

Gameplay
On the screen is a grid of colored oil spills, and the object of the game is to  assimilate all of the oil into your starting blob. The starting blob is labeled with an "S", and touch the buttons on the bottom to change the color of your starting blob. In the picture above, by pressing yellow your blob will assimilate all yellow oil dots touching it (vertically or horizontally, not diagonal). Because the "S" blob is touching all of the yellow dots, they would all be assimilated into the "S" blob which is now yellow. Then, since your "S" blob is touching all of the red dots, change the color to red, leaving only light blue dots.

You will be awarded stars based on the number of steps it took you to complete the level - 3 stars for doing it the most efficient way, 2 stars if you used 1 extra step, 1 star if you used 2 extra steps, and if you used 3 or more extra steps you will need to replay the level. The image above is an example of one of the easiest levels, while the image below comes from the Atlantis stage - the most difficult. Don't worry too much though - you are allowed more steps on harder levels. 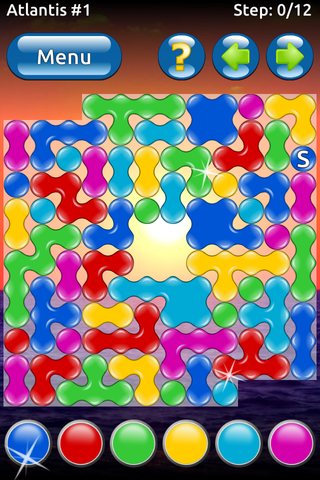 Strategy
No single strategy will work all the time, but using a mix of 2 strategies would generally yield positive results.

1) Find a color that is close to the "S" blob so you can eliminate it. Doing this allow you to focus more on the other colors, and whenever you assimilate dots you gain further reach, expanding your reach to other dots.

2) Get as much outreach as possible. If there is a long series of dots close to the "S" blob, go for it. Odds are more colors are touching this newly assimilated series of dots, which means that each color you choose will likely influence more dots, getting you closer to clearing the level. The picture below is a great example of using the outreach strategy.

Review
I found Color Oil to be a fun game, yet challenging enough to not get bored with it. If you are more of an intellectual than I am, you might just breeze through and beat the game before I've finished a single stage. On the opposite end though - logic games aren't for everybody and some will find this difficulty too much. For my use though, they nailed the difficulty level. I would highly suggest at least trying the free version.

You can find Color Oil on the Google Play Store for free (ads are unobtrusive), or there is also a paid version for $2 which includes more levels, solutions for all the levels, and is ad free. You can also see the Dev's site here, where they have another game, Reball, for iOS or BB.
Posted by Unknown at 10:26 AM
Email ThisBlogThis!Share to TwitterShare to FacebookShare to Pinterest
Labels: Android, App, Color, Oil, Review