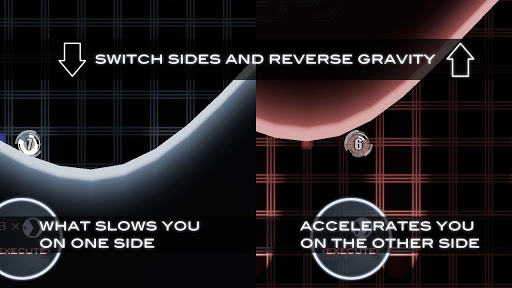 A wile ago I stumbled on an app made by a Redditor and I gave it a shot. Now that it's more complete (out of beta), it's time to give it some recognition. Sure, it may not be a completely original idea - gravity reversal isn't a new game concept - but GRM does a very good job making a fun casual game out of it.

The controls are as easy as they come: just touch the screen to invert gravity. The landscape is a series of crests/troughs, and the ball will follow gravity. When you are going downhill, you will speed up. If the ball starts rolling uphill, it will slow down. Simple, right?

Along the track are "buzz saws" which will violently rip the ball apart. When (not if) you touch one of them, you will have to restart from the last checkpoint. 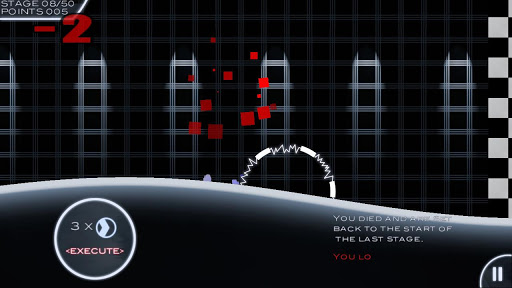 On the ball itself is a number which counts down. The counter on the ball will replenish when you cross a checkpoint. If this counter ticks all the way down, you can start again from the last checkpoint. It's great to have a fun, casual game that doesn't make you start over every time you die :)

After you've reached the end of the 'level', your direction will reverse onto a randomly different landscape which will be harder to maneuver.

This game is free, and can be found on the Google Play Store. It has less than 100,000 downloads, and an average rating of 4.4/5. You can watch the Gameplay Trailer on YouTube.
Posted by Unknown at 9:37 AM
Email ThisBlogThis!Share to TwitterShare to FacebookShare to Pinterest
Labels: Android, Game, GRM, Review