From time to time I look at my phone and think it's time to rethink my setup. In times like those, you'll find me searching through the personalization section of the Play Store. This time, I found Smart Launcher. 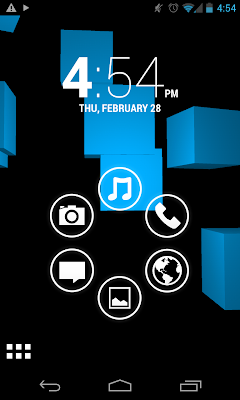 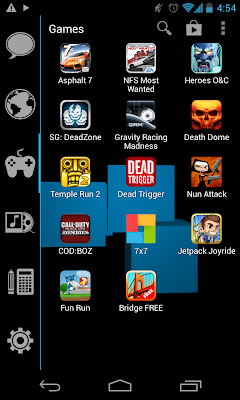 Smart Launcher is a casual minimalistic user's dream. Instead of homescreens, you are instead met with the "flower" - a ring of 6 icons which will launch your camera, music, dialer, Internet, gallery, SMS apps, and the camera (as far as I can tell they aren't interchangeable, but you can set the browser/music app you want to open etc.). You have the option of 4 icon styles which are pre - installed. Also on the home screen is the clock widget. The paid version supports additional widgets, however the free version doesn't.

This set-up is perfect for anybody who uses their phone as...well...a phone. It's simple, but you can't put games or other apps on the 'flower'...meaning you'll always have to go into the app drawer for all those apps you use all the time. This isn't a big deal, but I don't really like it. It would be great if the developer (GinLemon) would let users personalize the apps launched by hitting the icons. The button in the bottom left that looks like a grid is the app drawer button.

The app drawer is modified as much as the 'home screen' is. To get to it, either tap the grid icon in the bottom left of the home screen, or drag your finger from the left edge. The launcher automatically sorts your apps into groups (communication, internet, games, media, utility, and settings). From there you can organize them either alphabetically or by most often used. Unfortunately, like the homescreen these 6 folders aren't changeable either. You can however manually move an app to another folder - but the icons on the left and names of the folders are permanent.

Smart Launcher does a great job putting apps in all the right folders, and I'd assume that he somehow does this through the Play Store - finding which apps are in which categories and then going from there.

Smart Launcher is a fresh take on how how Android could look, and it's very sleek. For non-tech-savvy users, it's perfect. You can't get lost, and everything is 4 touches away tops (home, swipe left, tap on the group, then again on the app). You can find the app in the Google Play Store, where it's average rating is 4.6/5.